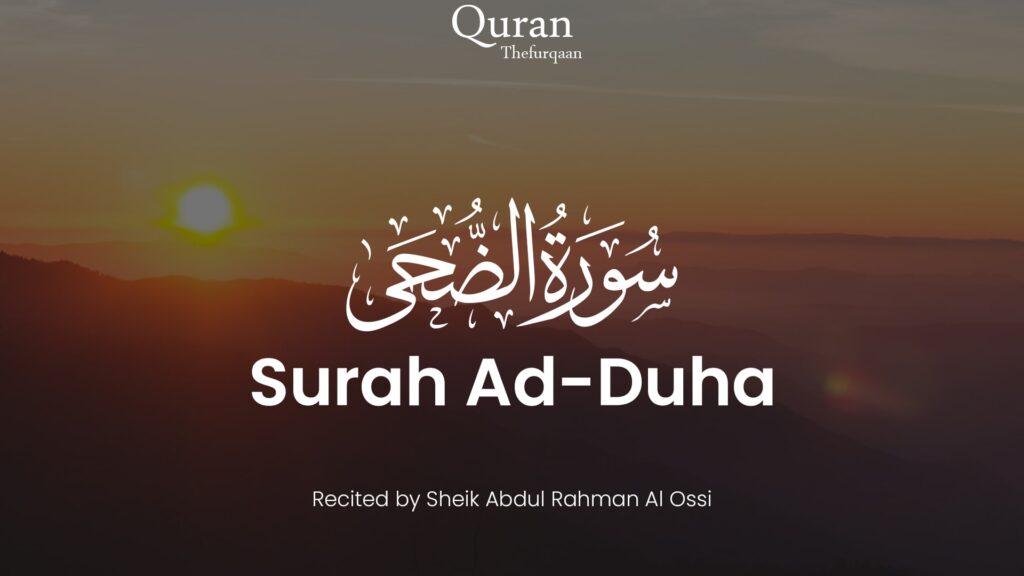 The Surah takes its name Ad-Duha ( Surah Ad Duha ) from the very first word. Its subject matter clearly indicates that it belongs to the earliest period at Makkah. Traditions also show that the revelations were suspended for a time, which caused the Holy Prophet (upon whom be Allah’s peace) to be deeply distressed and grieved. On this account he felt very anxious that perhaps he had committed some error because of which his Lord had become angry with him.

Thereupon he was given the consolation that revelation had not been stopped because of some displeasure but this was necessitated by the same expediency as underlies the peace and stillness of the night after the bright day, as if to say: “If you had continuously been exposed to the intensely bright light of Revelation (Wahi) your nerves could not have endured it. Therefore, an interval was given in order to afford you peace and tranquility.”

Its theme is to console the Holy Prophet (upon whom be peace) and its object to remove his anxiety and distress, which he had been caused by the suspension of Revelation. So First of all, swearing an oath by the bright morning and the stillness of night, he has been reassured, so as to say: “Your Lord is not displeased with you nor has He detested [you].” Then, he has been given the good news that the hardships that he was experiencing in the initial stage of his mission, would not last long, for every later period of life for him would be better than the former period, and before long Allah would bless him so abundantly that he would be well pleased.

Al-Bukhari, Muslim, At-Tirmidhi, An-Nasa’i, Ibn Abi Hatim and Ibn Jarir, all recorded this Hadith. In a narration from Al-Aswad bin Qays, he said that he heard Jundub say that Jibril [peace be upon him] was slow in coming to the Messenger of Allah ﷺ. So the idolators said, “Muhammad’s Lord has abandoned him.” So Allah revealed,

{By the morning brightness, And [by] the night when it covers with darkness,}

“When the Qur’an was revealed to the Messenger of Allah ﷺ, Jibril was delayed from coming to him for a number of days (on one occasion which is discussed in the first Paragraph). So idoltars started to say, ‘His lord hates him, So Allah Revealed ,

{Your Lord has not taken leave of you, [O Muḥammad], nor has He detested [you].}

{And the Hereafter is better for you than the first [life].}

Meaning that the Life of Hereafter is better than the the First ( wordly) life.

{And your Lord is going to give you, and you will be satisfied.}

{Did He not find you an orphan and give [you] refuge?}

Allah ask Prophet a question ” Didn’t he find him as a Orphan and give him Refuge? — This refers to the fact that Prophet’s Father died while his mother was still pregnant with him, and his mother died when Prophet Muhammad saw was only six years old.

{And He found you lost and guided [you],}

{And He found you poor and made [you] self-sufficient.}

{So as for the orphan, So do not oppress them.}

Meaning as Prophet was an orphan and Allah Sheltered him, So Allah says “Do not Oppress the Orphan.”

{nor repulse the beggar.}

{And proclaim the blessings of your Lord.}

Meaning that you were Orphan, needy , Allah helped you so tells about Allah’s Favour upon you.