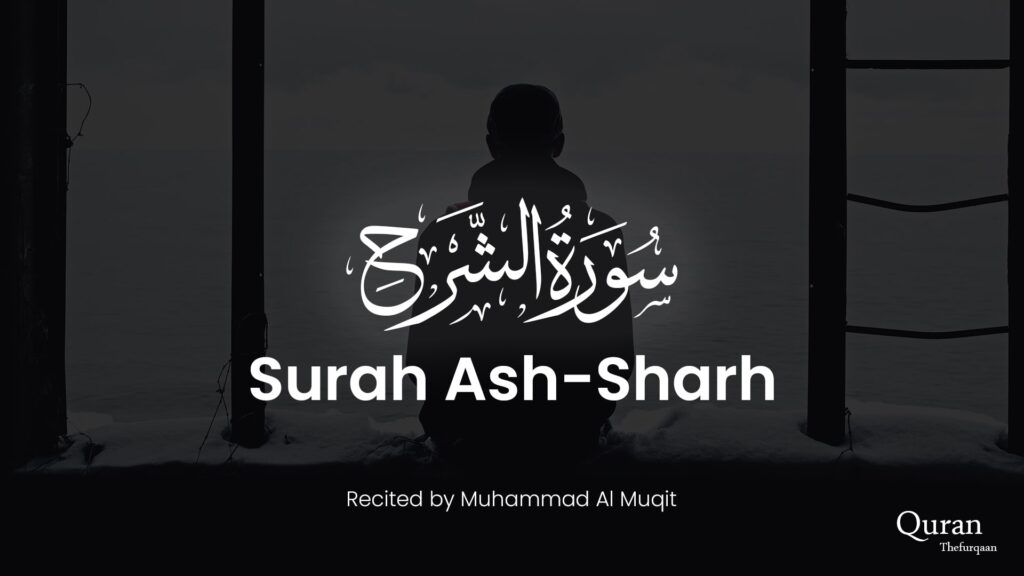 Surah Ash-Sharh subject matter so closely resembles that of Surah Ad-Duha that both these Surah seem to have been revealed in about the same period under similar conditions. According to Hadrat Abdullah bin Abbas, it was sent down in Makkah just after wad-Duha. The aim and object of this Surah too is to console and encourage the Holy Messenger (upon whom be Allah’s peace).

No one in Makkah was prepared to listen to him; he began to be ridiculed and mocked in the street and on the road; and at every step he had to face new difficulties. Although gradually he became accustomed to the hardships, even much severer ones, yet the initial stage was very discouraging for him. That is why first Surah Ad-Duha was sent down to console him, and then this Surah. {Peace and mercy of Allah be upon Our Prophet Muhammad صلى الله عليه و سلم).

[Have We not uplifted your heart for you ˹O Prophet˺, 1]

Meaning “Have we not opened your breast for you? ” . This means “We made your Heart vast, Spacious, wide, Kind-Hearted”.

This is similar to ;

{So whoever Allah wants to guide – He expands his breast to [contain] Islām; and whoever He wants to send astray1 – He makes his breast tight and constricted as though he were climbing into the sky. Thus does Allah place defilement upon those who do not believe. 6:125}

Discussion Of some Allah Favours on Prophet Muhammad saw

[And We removed from you your burden, 2]

[Which had weighed upon your back, 3]

[And raised high for you your repute, 4]

Qatadah said, “Allah raised his fame in this life and in the Hereafter. There is no one who gives a sermon, declares the Testimony of Faith (Shahadah), or prays a prayer (Salah) except that he proclaims it: I bear witness that there is no God worthy of worship except Allah, and that Muhammad (saw) is the Messenger of Allah.”

Allah informs that with difficulty there is ease, and then reaffirms this information (by repeating it).

Command of allah during free time

[So when you have finished (your duties), then stand up (for worship), 7]

[turning to your Lord ˹alone˺ with hope., 8]

Meaning when you have completed your wordly work, then get up to Perform Worship. With complete devotion and purify your intention and desire for your Lord.

This is End of Surah Ash Sharh Tafseer and All praise Belongs to ALLAH.