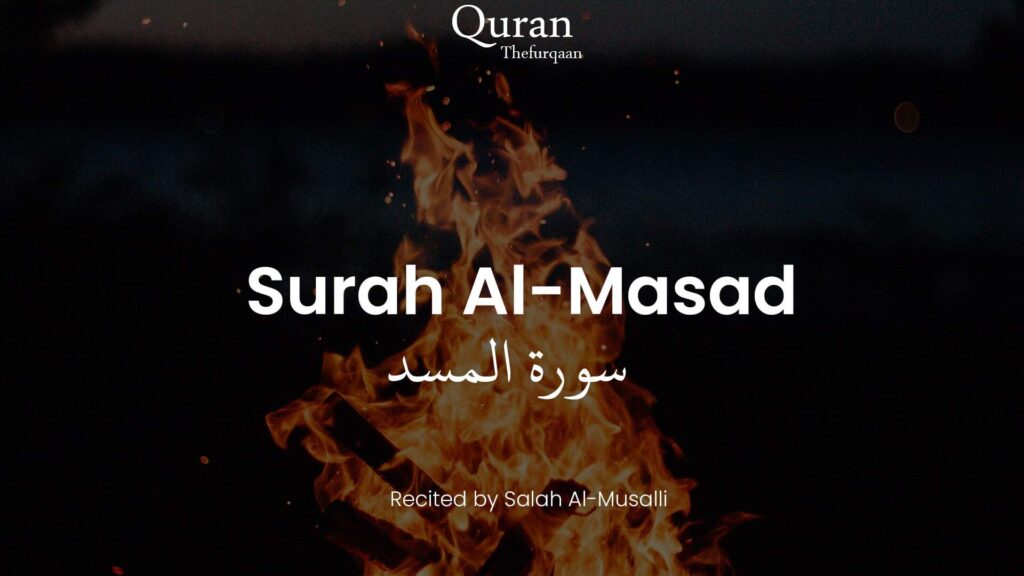 Surah Masad (Palm Fibre) is the 111th chapter of Holy Quran. It contains 5 ayats. Here in this post we will be providing you Beautiful Surah Masad Beautiful Recitation Video with its Tafseer (cause of revealation, why?) with Surah Masad in English Translation.

Note: The following video may have low resolution in preview, Please download the video for 1080p.

1 May the hands of Abū Lahab be ruined, and ruined is he.
2 His wealth will not avail him or that which he gained.
3 He will [enter to] burn in a Fire of [blazing] flame
4 And his wife [as well] – the carrier of firewood.
5 Around her neck is a rope of [twisted] fiber.

Tafseer ( cause of revealation, why?)

In the Name of Allah, the Most Gracious, the Most Merciful.

The Reason for the Revelation of this Surah Masad is the Arrogance of Abu Lahab toward the Messenger of Allah (ﷺ):

Al-Bukhari recorded from Ibn ‘Abbas that the Prophet ﷺ went out to the valley of Al-Batha and he ascended the mountain. Then he cried out,

(O people, come at once!) So the Quraysh gathered around him. Then he said,
(If I told you all that the enemy was going to attack you in the morning, or in the evening, would you all believe me?) They replied, “Yes.” Then he said,–
(Verily, I am a warner (sent) to you all before the coming of a severe torment.)

Then Abu Lahab said, “Have you gathered us for this? May you perish (be ruin)!” Thus, Allah revealed,

(May the hands of Abū Lahab be ruined, and ruined is he)

Who was abū lahab?

(His wealth will not avail him or that which he gained.)

(He will enter a Fire full of flames!) meaning, it has flames, evil and severe burning.)

(And his wife too, who carries wood.)

His wife was among the leading women of the Quraysh and she was known as Umm Jamil. Her name was ‘Arwah bint Harb bin Umayyah and she was the sister of Abu Sufyan. She was supportive of her husband in his disbelief, rejection and obstinacy. Therefore, she will be helping to administer his punishment in the fire of Hell on the Day of Judgement. Thus, Allah says,

(In her neck is a twisted rope of Masad.)

Al-‘Awfi narrated from Ibn ‘Abbas, ‘Atiyah Al-Jadali, Ad-Dahhak and Ibn Zayd that she used to place thorns in the path of the Messenger of Allah ﷺ. Al-Jawhari said, “Al-Masad refers to fibers, it is also a rope made from fibers or palm leaves. It is also made from the skins of camels or their furs. It is said (in Arabic) Masadtul-Habla and Amsaduhu Masadan, when you tightly fasten its twine.”

The above tafseer is extracted from Tafseer Ibn Katheer