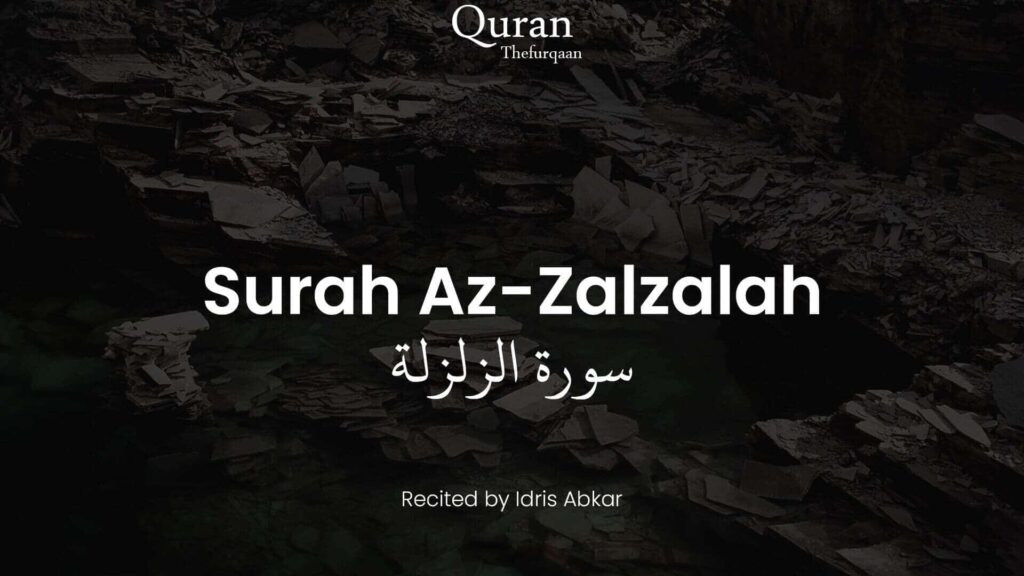 Surah Zalzalah is 99th surah of Holy Qur’an. It is Eye- Opening surah for those who have forgotten the Akhirah (the Day of Judgement).In this surah Allah S.W.T told us what will happen when Allah wills to end this wordly life.

Here in this post i am providing you, hand edited Surah Zalzalah (1080p) with download link and with short Tafseer.

Also check out my other Recitation video — Click Here

When the earth is shaken with its [final] earthquake [1]
And the earth discharges its burdens [2]
And man says, “What is [wrong] with it?” – [3]
That Day, it will report its news [4]
Because your Lord has inspired [i.e., commanded] it. [5]
That Day, the people will depart separated [into categories] to be shown [the result of] their deeds. [6]
So whoever does an atom’s weight1 of good will see it, [7]
And whoever does an atom’s weight of evil will see it. [8]

1 (When the earth is shaken with its [final] earthquake) “This means that it will move from beneath it.”

2 (And when the earth throws out its burdens.) meaning, it will throw forth that which is in it of the dead.

Allah s.w.t warned us about this zilzala (earthquake)

(O mankind! Have Taqwa of your Lord! Verily, the earthquake (Zalzalah) of the Hour is a terrible thing.) (22:1)

3 (And man will say: “What is the matter with it?”) meaning, he will be baffled by its situation after it used to be stable, settled and firm, and he used to be settled upon its surface.

This refers to the alteration of the state of things and the earth moving and shaking. There will come to it inescapable quaking that Allah prepared for it. Then it will throw out its dead people – from the first to the last generations. At that time the people will be baffled by the events and the earth changing into other than the earth, and the heavens as well. Then they will be presented before Allah, the One, the Irresistible.

4 (That Day, it will report its information.) meaning, it will speak of what the people did upon its surface.

Then prophet asked,
(Do you know what is its information?) They said, ‘Allah and His Messenger know best.’ He said,

People will be divided into groups