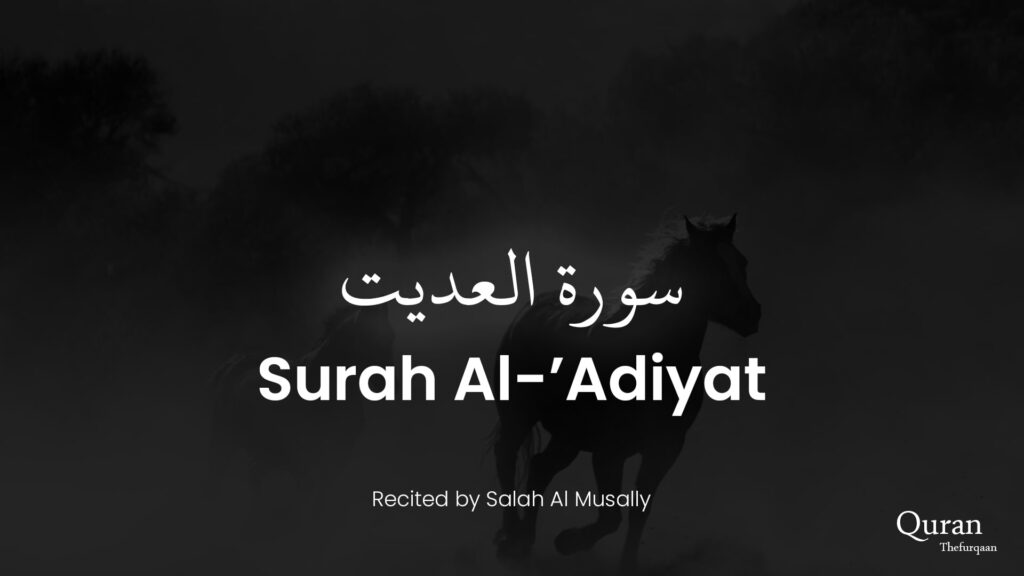 Surah Adiyat takes it name from the First Word ( Al’adiyat). Its objective is to make the people realize how evil man becomes when he denies the Hereafter, or becomes heedless of it, and also to warn them that in the Hereafter not only their visible and apparent deeds but even the secrets hidden in their hearts will be subjected to scrutiny.

For this purpose, the general chaos and confusion prevailing in Arabia, with which the whole country was in turmoil, has been presented as an argument. Bloodshed, loot and plunder raged on every side. Tribes were subjecting other tribes to raids, and no one could have peaceful sleep at night from fear that some enemy tribe might raid his settlement early in the morning.

Allah swears by the horses when they are made to gallop into battle in His path (i.e., Jihad), and thus they run and pant, which is the sound that is heard from the horse when it runs.

Meaning, the striking of their hooves on the rocks, which causes sparks of fire to fly from them.

Meaning, dust at the place of the battle with the horses.

[and penetrating into the heart of enemy lines! (5) ]

[Surely humankind is ungrateful to their Lord (6) ]

This is the subject what is being sworn about, and it means that he (man) is ungrateful for the favors of His Lord and he rejects them.

Qatadah and Sufyan Ath-Thawri both said, “And indeed Allah is a witness to that.” It is also possible that the pronoun (He) could be referring to man. This was said by Muhammad bin Ka’b Al-Qurazi. Thus, its meaning would be that man is a witness himself to the fact that he is ungrateful. This is obvious in his condition, meaning this is apparent from his statements and deeds.

Threat about the Hereafter

Then Allah encourages abstinence from worldly things and striving for the Hereafter, and He informs of what the situation will be after this present condition, and what man will face of horrors. He says,

[Do they not know that when the contents of the graves will be spilled out, (9) ]

Meaning, the dead that are in it will be brought out.

“This means what was in their souls would be exposed and made apparent.”

Meaning, He knows all of that they used to do, and He will compensate them for it with the most deserving reward. He does not do even the slightest amount of injustice.

The Above Tafseer is Taken From “Tafseer Ibn Katheer”.